The following descriptions have been made available through a QR code for visitors to the exhibition so that they can be used with text to speech software. We will post more information from our opening event later.

We expect visitors to participate in the creative process by touching the tactile pieces and leaving their own fingerprints on the work.

We all move through the world in different ways. These passages through space and time leave traces – some visible, some invisible. This exhibition looks at these journeys from two perspectives, sight and touch. Alan McIntyre’s work, White Stick Trails, is a visual depiction of how he navigates his environment. His other works Dream Walks explore journeys and walks through nature and are explorations of how he can make these paths (and his art) meaningful to himself as an artist, who is losing his sight and to others.

The concept of White Stick Trails was used as a catalyst for the second section of this exhibition Imizwa Yobucuko (Pulse of Creativity) a collaboration between Crossing Countries (a Scottish social enterprise), Mason Lincoln Special Needs School and Bobbi Bear (a human rights organisation for sexually abused children) both in South Africa.  Their work maps both their everyday paths and the longer journeys they have taken towards safety and education. Creativity comes in many forms. Although, these artists may not have created visual art before, they all have the pulse of creative thinking in their veins as their lives testify.

These works explore journeys and walks through nature. I have always been fascinated by maps and their multipurposed values of telling you where you have been, where you are and where you want to go. Maps encourage boldness and the creation of adventure. They can give so much inspiration and potential for good times. Like adventure postcards that are yet to be written. These works are interested in concealing and revealing paths and traces of imagined journeys across memories of landscapes of my imagination. While the details and functions of maps are now lost to me, and the locations and fascinating complex designs of the maps are mere shadows and imagination. I used the abstract nature of map fragments as patterns and designs as fractions of memories and locations of past trips or holiday captured screenshots. Exploring memories of unseen journeys that I have yet to take.

This collage series explores travel and play. My love for collage has increased as my sight loss has progressed. The excitement of realising the subject of a collage paper after feeling the shape is thrilling. Using collage playfully to combine and contrast travellers and landscapes in unusual combinations. Making unseen journeys of fantastic unrealities.

Alan wanted to capture impressions of his emotional and sensory experience as he navigates his environment and to incorporate these into his art practice. He is reliant on the signals from his white stick and by taping a marker pen to it he was able to trace his path around objects on a paper path.

To further explore inclusivity, variety and diversity, he made smaller ‘trail’ drawings that use special “swell paper”. This produces a raised line that can be felt. His work also includes a video made using accessible technology with his own musical composition expressing his journey.

The blind and visually impaired learners at Mason Lincoln Special Needs School copied Alan’s technique. For many this was their first opportunity to create art. They chose to use coloured paint markers and made three banners. Two of the banners were cut up and used as backgrounds on which they created their own haptic vision of their journeys around the school grounds. The Tree of Empowerment, a collaboration with Bobbi Bear, depicts the journey the children took towards a place where they could deal with the trauma in their lives and felt safe.

These pieces were created as examples to demonstrate to the blind and visually impaired learners at Mason Lincoln School how different materials can be used to show their journeys around an environment. They were asked to create something that not only depicted their view of the school grounds from above but also was a pleasing ‘painting’ to touch.

Born in 1970, in Lamontville, south of Durban. I studied art at Johannesburg Art Foundation a private art school between 1992 and 1994. I later did a B-Tech degree at Durban University of Technology. My work is about everyday life that in the townships but, I focus more on the conflict that exists between the Zulu culture, its customs and Christianity religion. I feel that Colonialism has robbed us of our true cultural identity. In my work, I wish to find the balance between the two as they co-exist in my life. Having been born in the township, I feel like I have missed a lot of important things about my cultural identity that could have contributed to my understanding of who I am.

When the children and volunteers at Bobbi Bear heard about what was happening at Mason Lincoln School, they wanted to be part of the exhibition. To symbolise their journey to the Tree of Empowerment under which they meet on a Saturday morning to play games, have food, get counselling or first aid, they painted their feet and ran across this sheet. Some ran straight there, some walked slowly, and some took longer routes. When the art teacher at Mason Lincoln heard their story, he painted this Tree of Empowerment with the autistic learners.

On Monday 25th April the Melting Pot held the Next Big Social Thing to celebrate the achievements, in the last seven months, of their awardees on the Social Innovation and Incubation Award programme. Along with 9 other innovative social entrepreneurs Crossing Countries were showcased to funders and potential partners.

Yvonne Strachan, head of equality, human rights and third sector division, of the Scottish Government said “What they are doing is incredibly important for our future.”

During these seven months Jean learnt about business planning, marketing, branding, leadership, resilience and herself! It was an invaluable experience and has made Crossing Countries a more realistic and sustainable business, although like all the other amazing social enterprises on the programme they will continue to dream big and fight for everyone to be seen as valuable members of society

Macsween’s haggis, the Collumcille Ceilidh Band, the talented caller and the warm, welcoming atmosphere of the hall at the Church of the Good Shepherd made our 2016 ceilidh a truly inclusive and community event. Raffle prizes which added up to the value of over £600 from Will Power, Indie Venture Marie Flynn, Invisible Edinburgh, the Tool Library and Pop Up Scotland heightened the excitement.  From 7 years to 70 years, in wheelchairs or on two feet, from Scotland or elsewhere everyone was up dancing and having fun.

Time to dance you socks off to the Collumcille Ceilidh Band, munch a haggis supper (kindly donated by Macswean) and to have a thourghly energetic and fun packed evening.

The Church of the Good Shepherd in Murrayfield have been good enough to support out project in so many ways including letting us use their hall as our new venue. Hope you will be able to come along on the 23rd April 7-11pm!!

You can get your tickets here

On Friday 18th March Suzi and Jean met the team who transformed our web site at the 8 hours overtime for a good cause event hosted by Skyscanner. From 7pm to 3am Anna Monus, Naiba De Bona and Siwei Kang worked their socks off to build a new more accesible site. We can’t say thank you enough to them for all their hard work on the evening and their continued support after the event. Oh and a big thank you too to the organisers of the event for selecting Crossing Countries and to Skyscanner for their support. 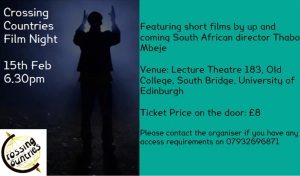 Two of my fellow awardees on the SIIA scheme has today published an article about us in their on line magazine that seeks to integrate the Spanish Community in Scotland. Their magazine is brilliant and I highly recommend that you read it. Here is our article but do read the rest of the magazine it is informative, well written and exactly right for a dreich Friday afternoon on the sofa.

BIG THANKS to Jordi, Noelia and the rest of their team.

The more often I explain what Crossing Countries does and why we do it the more I am convinced that it is the ‘why’ rather than the ‘how’ that is important. This became even clearer when we were invited to be part of the Social Dimensions of Health Institute stall at the Dundee Science Festival earlier this month. Their theme was ‘Perceptions’ and included information about optical illusions, perceived identities and vulnerabilities. ‘Change your thoughts, change the world’ was the catalyst for our display which asked people to question what they saw. Was the kite made out of a black bag and straws, rubbish or a kite? Was the model of a car, wire or a toy and were the people in the fashion show, models or wheelchair users? 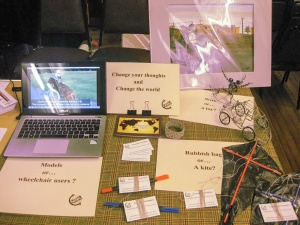 Last weekend we did our very first craft fare for WHALE at St Cuthbert’s Episcopal Church in Colinton. It was a delightful introduction into the word of crafters. We met lots of lovely people who were so positive and supportive of our enterprise. The Ikwhezi Welfare Organisation’s ceramics sold very well so we will definitely bring some of those back next year. I have a feeling this won’t be the last craft fair we do. 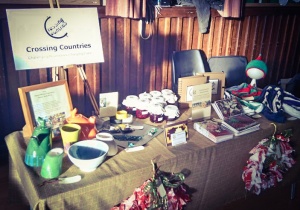 The Crossing Countries team and I are very sorry that Beth has stepped down as Co director but remains on the team with a special interest in events. We want to say all the things that everyone says on these occasions and more. She has been with us since we dreamt of going to Africa, before Crossing Countries was actually born. You could say she is one of this baby social enterprises’ parents, while also being one of its offspring. So Crossing Countries work is done here, she has challenged her boundaries and it is time for her to change her life… time for her to fly and become the world renowned author we know she will be. She has been well warned that when she is signing autographs for the likes of JK Rowling or picking up her first Booker prize she will be wearing a Crossing Countries sweatshirt and selling tickets at our next event.

Here is a little collection of our favourite memories of the gorgeous ginger known as ‘Bethers’…. 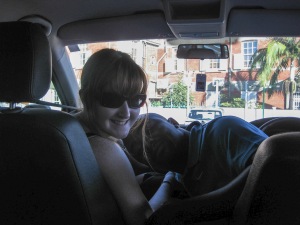 Getting out there and getting Crossing Countries known is a job in itself. To add to the events we have been taking part in we have also had a photo in the Edinburgh Evening News and a feature in the excellent  Disability Horizons

Laura and I were also invited by Professor Thilo Kroll, to the Social Dimensions of Health Institute, which brings together researchers from both Dundee and St Andrews Universities. Our reflections about our trip can be heard on the link here.

Crossing Countries is now a member of the Scottish Disability Equality Forum and we have been to our first meeting where the Scottish Government Draft Delivery Plan 2016-2020 was discussed.